Bhopal Couple Fall Off Scooter As It Topples On Its Own, Woman Blames Biker Behind Her

There have been several cases in which a person has been falsely implicated in trying to cause a major road accident. We see it all the time. Take for example the Lucknow girl case, where a poor cab driver was assaulted and humiliated on the road. A similar thing almost ended up happening in Bhopal.

According to Indian Express, two people, a man and a woman, riding on a scooter happened to fall down on the road while in motion. Right after the woman got up from the road to settle herself, she blamed the guy riding a bike behind them, to no fault of his own! 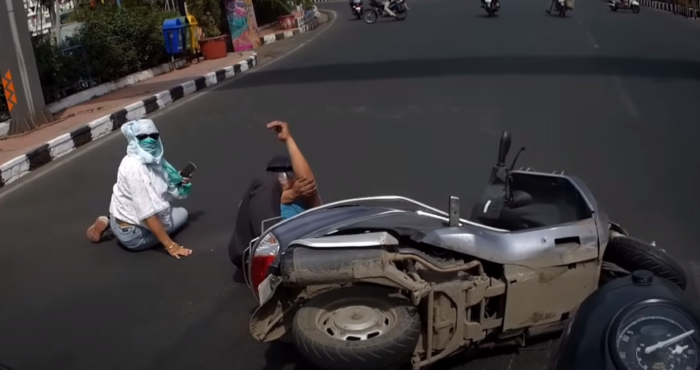 Thankfully, the guy was recording his bike ride on camera which captured the entire incident. Or else, who knows? He could have been falsely implicated as well. While the woman continued to blame him, the man mentioned that he has captured the entire incident on camera which will prove his innocence. It was then that the couple shut up.

The video clearly shows that the scooter toppled on its own. However, the couple insisted on filing a police complaint against the bike rider. The guy went on to show the cops the video, proving himself innocent.

“This video’s purpose is just to show what kind of incidents can happen and just a slight wrong move can get you in trouble even though it’s not your mistake. Always be aware of your surroundings and ride safely,” wrote the biker while sharing the video.

What are your views regarding incidents such as this?