One thing that most Indians will find minutes within leaving their homes is potholes. Despite potholes being a major cause of road accidents, authorities in many places have chosen to neglect them.

In order to grab the attention of such authorities, women and children in Bhopal’s Danish Nagar organized an event wherein they performed a catwalk on the potholes. According to The New Indian Express, residents living in the area paid a high price for their plots, as it’s considered to be a posh area. 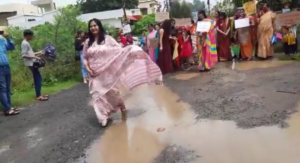 “Since our representations to authorities and elected representatives on lack of amenities have gone unheard, we organised this catwalk on the potholed and water-filled roads of Danish Nagar. If our problems are not addressed, we will not vote or pay taxes,” she said.

The participants of the event also held placards that took a sarcastic dig at a statement made by the Chief Minister back in 2017. At the time, the CM had said that the roads in Madhya Pradesh are better than that of the U.S. 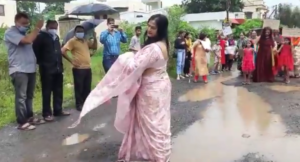 According to India Today, women dressed in sarees walked the pothole-filled road, which was also waterlogged. They demanded the roads be fixed immediately.

A resident said, “Because of the huge potholes on the roads, accidents are happening every day. Yet the roads are not being repaired. What are we paying taxes for?”

WATCH | In this unique show of protest, a group of women from the Hoshangabad Road area in Madhya Pradesh’s Bhopal held a ‘catwalk’ on the potholed roads to get the attention of the authorities.#viral #ViralVideo pic.twitter.com/Kbfie2TTdu

Pothole-filled roads are the reason why several fatal road accidents are taking place every day. We hope that the authorities fix them soon!