First impressions matter, especially when you’re interviewing for jobs. The first time your employer meets you, they don’t see your skills but how you dress, your body language, how you speak and your confidence. So applicants are always expected to dress sharply, even if it isn’t said aloud.

One applicant in Bengaluru, who is 26 years old and a self-taught programmer, arrived for his interview wearing 4-5 rings on his fingers that appeared flashy.

After he cleared the first round of interviews, HR asked him to dress formally and not wear the rings in the next interview. He took to Reddit under the subreddit r/Bangalore to narrate his ordeal.

“I went on the first day of the front-end job interview. After the first round, HR called me out and informed me that I had been selected for the second round, and she wanted to move ahead with my application and asked me to dress formally and not wear rings. I usually wear rings on 4-5 fingers, which look flashy.”

So he bought new clothes, removed the rings and cleared the second and third rounds of interviews. However, the Bengaluru company rejected him and the alleged reason they gave him was that he wears too many rings.

“On the second day, I purchased newer clothes, removed the rings, and went for the second and 3rd rounds, I did a pretty good job at it, but one of the reasons they gave me while rejecting me was I was wearing rings. I am 26 and a self-taught programmer; this is the first time I am facing an interview, my previous job did not involve a formal interview.”

In an earlier interview which took place in Indiranagar, the applicant arrived wearing track pants and a cap. Rejection for the job was inevitable.

“Previously I went for a job interview at Indiranagar, wearing a cap and going in my tracks. I had all the eyeballs glued on to me. I then realized I am not in the US and IT companies still expect a dress code. I taught dress code would not be an issue. Because I did a good job at the interview and never got any feedback.”

Since the guy was sulking about being rejected from the job, several people online gave him advice. While some claimed that he dodged a bullet, others said that one has to dress appropriately when they go for a job interview. 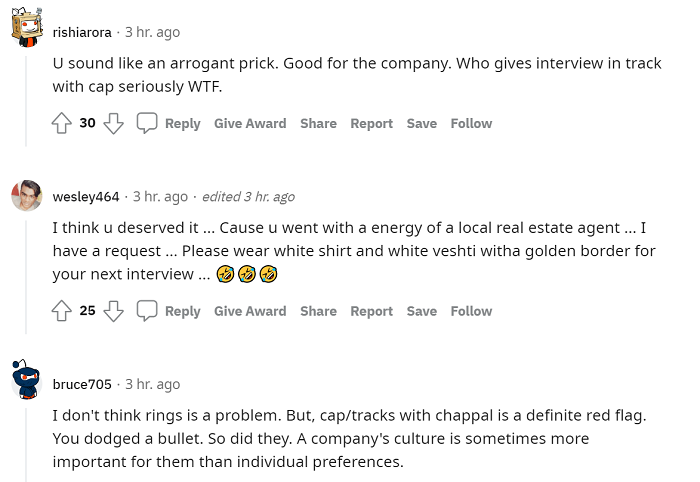 There are only a handful of very cool companies who don’t judge applicants on how they dress but solely on their talent. But for a majority of companies, it does matter how you choose to present yourself.