One of the things that are inevitable for any professional of any age is feeling sleepy during work hours. It’s either because of work stress or the lack of proper sleep the night before. And sometimes, multiple cups of coffee don’t cut the urge to take a little nap in between work.

However, a company in Bengaluru has fulfilled this dream. According to Times Now, Wakefit Solutions’ co-founder Chaitanya Ramalingegowda announced an “official nap time” of 30 minutes for its employees.

“An afternoon nap is instrumental in helping the body recharge and refocus on the task at hand, thus improving workplace productivity and motivation.”

A screenshot of his mail which was probably sent to his employees has gone viral online. The co-founder claimed that his decision was backed by research done by NASA and Harvard University. A study by NASA suggested that a 26-minute catnap can “enhance performance by 33 per cent” and a Harvard study showed how naps “prevent burnout”.

“We have decided to normalise afternoon naps at work and declare 2 to 2:30 pm as official nap time for all our employees. From now on, you will have the right to nap between 2 to 2:30 pm,” the email read.

You can read the complete email here: 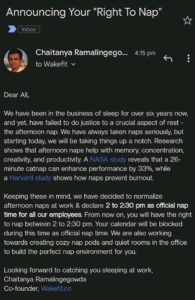 This move by the company was met with a lot of praise online. Have a look:

Wakefit – a Bengaluru based home solutions company, has made naps official during work hours 😮 This obviously cannot go right with every profession but it’s so cool. #Wakefit #Nap #PowerNap pic.twitter.com/iCJM4jhNoO

Companies needs to treat employees like real people not "resource". Here is a Co-Founder of a Mattress company "Wakefit" #workreform pic.twitter.com/Vd2kYb5weu

According to Business Today, Wakefit has over 600 employees. Now all of them will be entitled to take a power nap in the afternoon. How lucky!

Do you think other companies will adopt this policy too?