Two days ago, a very significant incident made headlines. Jacinda Ardern resigned as the Prime Minister of New Zealand. She strongly performed the role of PM for 5 years. Her reason for the resignation was simple – “I know what this job takes. And I know that I no longer have enough in the tank to do it justice. It’s that simple.”

The Guardian quoted her saying, “I’m leaving, because with such a privileged role comes responsibility – the responsibility to know when you are the right person to lead and also when you are not. I am human, politicians are human. We give all that we can for as long as we can. And then it’s time. And for me, it’s time.”

Over the past couple of months, Jacinda Ardern gave serious thought to whether she had any energy left to perform the role and she concluded that she did not. She is also the mother to a daughter, whom she gave birth to while being on the PM’s chair.

Over her tenure as the Prime Minister, Jacinda has been recognized as one of the very few leaders in the world who was able to keep the Covid-19 pandemic at bay in their respective countries. She earned massive respect and appreciation around the world for her proposal to have a 4-day work week, her empathy towards the Christchurch terrorist attack victims’ families, and for being a solid inspiration.

However, amidst all this, BBC came up with a very sexist headline and an article to share the news with the world. It read, “Jacinda Ardern resigns: Can women really have it all?” 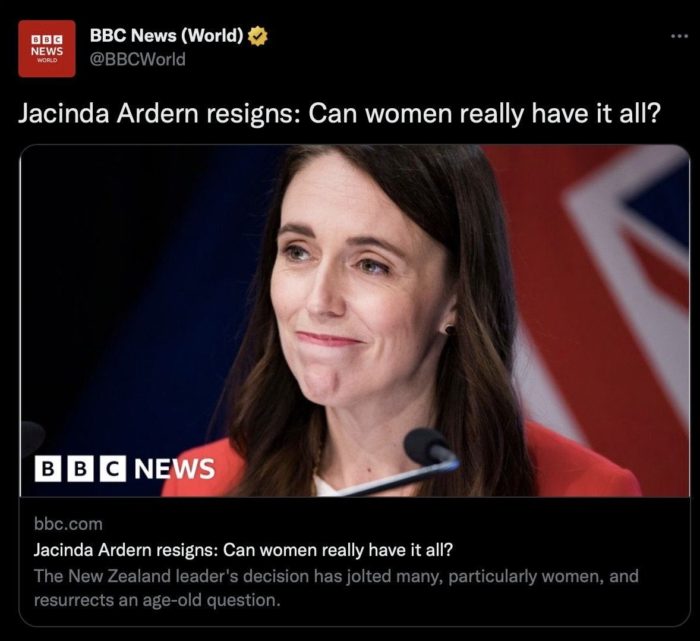 Several people online slammed BBC for its headline on Jacinda Ardern and called it regressive, misogynist, and completely opposite to the empathetic manner in which they had reported Boris Johnson’s resignation. Have a look:

The 1950s came by and picked up their headline. pic.twitter.com/qlI6qZLBfa

Women can only have it ALL- including Courage, Honesty, Reflection of their own actions and acceptance of truth !

And men will never get that, that’s their inability ! https://t.co/uCfjdxKRIN

Yes they can.
They choose not to*

BBC needs to change their name to BS, it's time now https://t.co/U8NX2v1C1y

No,it didn't jolt women & this tag line did not cross our minds for sure. She has been and will remain an example of "having it all" for us. From having a child during her tenure to tackling the pandemic in the best manner ever, she did it all side by side. More power to her 💙 https://t.co/b1ZVpqG7Bt

Yeah they clearly missed the point of how empowering her decision was. Her terms, not anybody else’s.

An embarrassing day for the media. What a disrespectful way to celebrate a refreshingly phenomenal leader like Jacinda Arden.

Yeah; I mean she did do it for seven years

All media are despicable and shape peoples options even if they don’t realize it. They carefully select their words in order to influence how people are thinking.

If anything it shows that she knows when to step down and when to accept the job has become too much but most male leaders will just try to hang on to power for as long as they can!

This is a disgrace @BBCWorld. Jacinda Ardern has been a longstanding leader and international hero. Because of her, many more women have bigger aspirations and will enjoy bigger successes. She did it all. pic.twitter.com/Fx2HhtOI96

Saddened to see such a reductive, sexist and inaccurate headline from the BBC World. It should read “Jacinda Ardern resigns: a world leader showing courage by breaking the taboo of discussing emotional and mental wellbeing” https://t.co/yjeM8RJ4pV

After being slammed left, right and centre, BBC changed the headline and massive chunks from the article and even apologized saying, “We quickly recognised the original headline wasn’t suitable for the story and changed it accordingly. We also deleted the associated tweet,” reported NDTV.

They changed the headline of their article which now reads, “Jacinda Ardern Resigns: Departure reveals unique pressures on PM.”

What a shame that such an acclaimed publication would be biased to this extent.