Home Food For Thought Bangalore Bus Driver Sets Up A Stunning Mini Garden In His Bus...

If you are one of those who have kept a close tab on the internet over the past few months, you may know about the Kolkata auto driver who found out a brilliant way to beat the heat. However, his genius idea to set up a garden on top of his auto was not only to stay cool during the summers but also an effort to raise awareness about the environment.

And now, following his footsteps, we have a bus driver in Bangalore, who has come up with a mini garden inside his bus. Bangalore Metropolitan Transport Corporation’s (BMTC) bus driver Narayanappa has kept around 14 plants in his bus, which he drives between Kaval Bylasandraa and Yeswanthpur in the city. 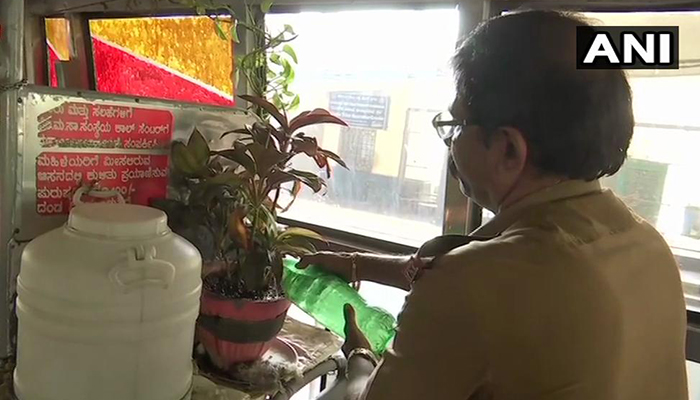 According to The Indian Express, he wanted to make people know the importance of keeping the environment green and had started his mini garden 3-4 years back.

K'taka: A Bangalore Metropolitan Transport Corporation bus driver has kept plants in the bus he drives,which plies between Kaval Bylasandraa&Yeswanthpur in city. Bus driver Narayanappa says,'Have been doing it for last 3-4 yrs to create awareness about keeping environment green.' pic.twitter.com/4j2AUuRUor

“I have been doing it for last 3-4 yrs to create awareness about keeping the environment green.”

According to the man who has been driving the bus for the last 27 years, he got inspired by his wife and children who maintain a garden at their home. Speaking about the same, he said,

“In our house, my wife and children make new additions to our little garden every now and then. It was they who inspired me to build a mini garden inside the bus. With this move, I want to spread the word about keeping the environment green and healthy. If this small move of mine even inspires one of my daily passengers, it will mean a lot.”

He also welcomes his passengers to water the plants if they want to do so.

As soon as the pictures of his bus were posted online, Netizens came together to laud Narayanappa and his noble motive.

When each citizen does his bit we will see a visible change. Congratulations!!

Some buses have other themes. This one dedicated to Kannada icons pic.twitter.com/OaPoFwxmMz

we need people like you. we are losing green cover

Sometimes small action leads to big impact. Hats off to this Man !!

Take a bow Mr. Narayanappa. You are definitely showing us a way to make this world a better place to live in.