Recently, Badshah released his new single Genda Phool and it instantly became a hit. The amalgamation of Badshah’s rap with a few lines from the Bengali folk song ‘Boroloker Bitilo’, with the beautiful Jacqueline Fernandez dancing while draped in a Bengali-style saree appealed to a large audience.

However, many people from the Bengali community were quick to point out that the Bangla folk song ‘Boroloker Bitilo’ is one that was written by a man named Ratan Kahar in the 1970’s. Accusations of plagiarism and minting money off an old man who lives in poverty in a village in West Bengal started to blatantly hit Badshah.

#Blasphemous @Its_Badshah has stollen the "Gaada Ful" song from Ratan Kahar without seeking express consent from or giving any credit to the original composer.@YouTubeIndia must immediately withdraw this video from their site with an apology to the Bengali community.#GendaPhool pic.twitter.com/VDC3yo7lc6

@Its_Badshah wat you have done to this iconic song!!?!! Do you know the history of this song!!??!! Do you know this man named Mr Ratan Kahar!??!! Sorry to say, but you and PAYAL DEV has just ruined it..was always a big fan of yours.. Was!!! #GendaPhool #Badshah #Bollywood pic.twitter.com/s4GNlgVtyS

Rapper Badshah again didn't bother to give credit to the original lyricist of the Bengali verses in the recent song #GendaPhool. The verses are by Bengali folk singer Ratan Kahar.
Atleast give original lyricist the credit. pic.twitter.com/Ve04KOzb7P

I feel ashamed to admit the fact we as citizens have repeatedly showed more acceptance to the remaking of songs(especially). #Gendaphool was a song composed and written by Ratan Kahar, who wrote this pondering over a very different emotional interest from what is actually shown.

Here is a video of RATAN KAHAR performing his classic hit GENDA PHOOL from his residence in Shiuri (Birbhum district, West Bengal): https://t.co/akhGFAXgvc
In the end, he expresses (in Bengali) his sadness for not getting credited for his lyrics and composition.

I'm fuming at Bollywood's audacity to rummage through Ratan Kahar's iconic Bangla song "Boro loker beti lo" & ruin it with this disgusting version GENDA PHOOL. We know you're mediocre & have run out of talent, but what stopped u from giving proper credit? Grow a spine rich kids!

It is shameful that Badshah did not give any credit to Sri Ratan Kahar the original composer of the song Genda Phool, a very popular Bengali folk song of 70s. His act is most unethical and immoral.

According to India Today, Ratan Kahar opened up about the issue and said:

“I wrote the song ‘Boroloker Bitilo’. The music, the words, everything is mine. Now, if people are dishonest, what can I do? I am extremely poor. Many people have taken my songs, but have not given me credit. They can’t write their own songs. They used my songs as their own. I live in a hut. I write songs of the soil. I don’t have the financial strength to drag them to court.”

However, Badshah recently took to Twitter to address these accusations., reports Hindustan Times. He claimed how nowhere in “copyright societies” is it mentioned that Ratan Kahar is the lyricist of the song. 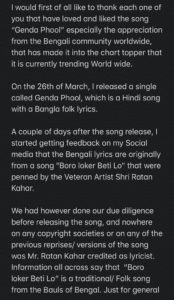 He added how traditional songs are “open for recreation/reprising/sampling globally”. 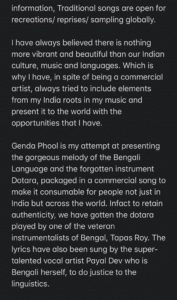 He further went on to claim that after receiving so much information from the Bengali community, he has been trying to reach out to him but is unable to do so because of the nation-wide lockdown. However, he will try to do whatever he can to help him on “humanitarian ground”. 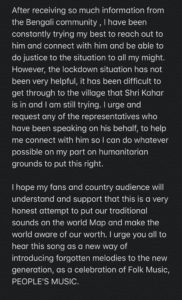 What do you think of this issue? Tell us!