Atheists Who Married Religious People Share How Their Lives Have Been

Religion is such a personal thing for people that it shapes much of how they are as a person. Hence, when it comes to relationships, being religious or not can be a dealbreaker if a common ground isn’t found. There are also people who are atheists and agnostics and having a partner who is extremely religious can create a space for conflict.

Hence, a guy from Bangalore took to Reddit under the subreddit r/bangalore to ask atheists who married religious people how life has been for them.

“My parents have started searching bride for me and it seems like everyone takes great pride in how their child is super religious when I’m a closeted atheist. It’s kinda awkward,” he wrote.

Atheist/agnostic people who have married a religious spouse, how has it been? from bangalore

Surprisingly, a lot of people shared their personal stories. There have been cases where people tried to impose their beliefs, whatever they may be, on their partners and it created a rift between them. But there were also many cases where the couple found an equilibrium – you do your thing and I’ll do mine. 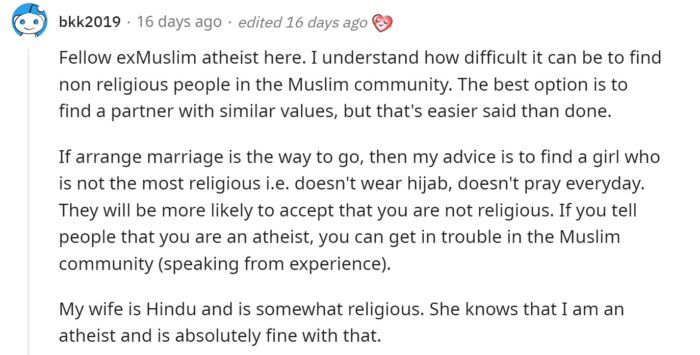 Everybody should have the freedom to exercise their own beliefs, as long as they are not forcefully imposed on another person.