‘My Dream Came True’ 17-YO Mumbai Girl Who Lived, Studied In Footpath Finally Gets A Home

17-year-old Asma Shaikh spent her entire childhood living on a footpath in Mumbai. Her father worked as a humble juice seller on the same footpath, but his business was hit hard due to the coronavirus-induced lockdown.

It can be said that Asma has an indomitable fighting spirit. All she wants to do is study hard so that one day she can give her parents and herself a comfortable life. She spent days on end studying under streetlights. In 2020, she cleared her class-10 board exams, reports NDTV. Wanting to have a roof over her head is one of the things that keeps her going.

“I want to study till graduation. I will study so much that one day I can get a house of my own,” she told BBC in an interview.

Currently, Asma Shaikh is in class 12 studying Arts in KC College, Churchgate. Last year, due to the lockdown, her college and library were closed. So she had to attend online classes while sitting on the footpath.

She revealed how attending online classes from the footpath has been a major problem. First, there is a lot of sound from vehicles and second, she has to study under the dim light. Police patrolling has been the most problematic.

“We can’t sit here. There are arrangements made by the police wherein cops come and drive us away. So I have to keep moving from here to there,” she said. 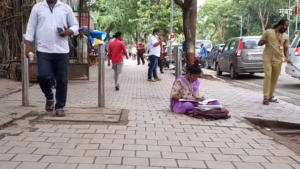 “I feel scared to go to college. It’s a big college and I haven’t been around such well-to-do people. I could never make friends.”

What’s even more heartbreaking is that there is no safety for her and her mother on the footpath. She revealed that on some days, they have difficulty sleeping as men come and harass them and sleep beside them, for which she carries a bamboo stick.

Here’s a look at her story:

However, there is always light at the end of the tunnel. After her story went viral, many people offered to help her. A Mumbai-based NGO named ‘Aai Caretaker’ recently decided to sponsor her education by donating Rs 3,000 every month till she completes her studies. They even took to Facebook to share the news. Have a look:

That’s not all. Another group of people living abroad raised Rs 1.2 lakh so that Asma and her family can rent a house and afford their basic family needs like rent, electricity bills, food, etc.

Asma’s dream has finally come true. On Thursday, her family moved into their new home, reports TOI. It is a 1 BHK flat where they will be living for at least 3 years!

“My dream is complete. I am so happy,” she said.

As they say, dreams do come true for people who work hard!