Shah Rukh Khan’s son Aryan Khan garnered a lot of attention from celebs and people alike when he was named in the drugs on cruise case. But after being in jail for a while, the star kid was given a clean chit after the NCB couldn’t find any evidence against Aryan that would prove that he was part of the drugs syndicate.

Aryan must be finally taking a sigh of relief and getting back to his normal life after going through such a traumatic experience. Recently, junior Khan was allegedly spotted enjoying his time at a party in a posh Mumbai pub, the video of which has now gone viral. 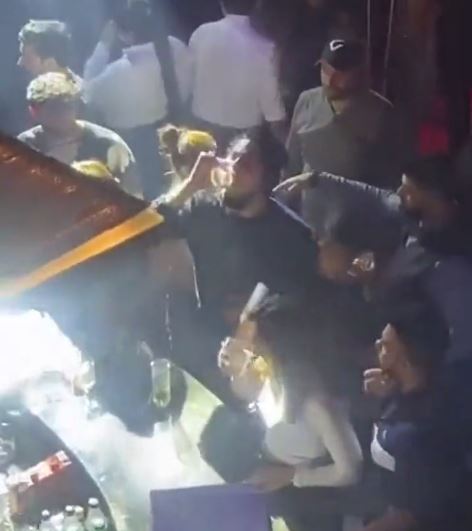 Even though the clip captured from far off doesn’t testify that it was Aryan, people tried to pull him down for chugging drinks and having a gala time at the pub after being given the green signal in the drugs case.

#WATCH A video shared by Aryan Khan's fan pages show the star kid partying at a nightclub in Mumbai with his friends, after getting a clean chit from NCB in the drugs on cruise case.#AryanKhan #NCB #Viral pic.twitter.com/ppMexAPq6n

A handful of people tried to defame him, again.

So Aryan Khan back to his ostentatious lifestyle! Just when Money & Power overplay Law & Order,accused get promoted for further crimes! @narcoticsbureau @dg_ncb clean chit to this accused is only going to play more havoc!
Salute to the honest efforts of @swankhede_IRS pic.twitter.com/034EYfxJ7x

Others are using this video to point out #AryanKhan being irresponsible.
I see him being super responsible. Observe how he masks up right after taking his shot. :)) https://t.co/rjTExxg1YQ

This is what system is…@narcoticsbureau nice work done👍👏
A common man once arrested will never be back and take years.. But a man having money plays with system👏👏
Question not only rises to investigation but also to ministries @HMOIndia @AmitShah@PMOIndia @narendramodi https://t.co/qfklqjNMQ0

However, several well-wishers came to his rescue saying that he has all the right to party and chill.

Indian media and public is a joke. Their thinking is so backward. Let the boy live. You all do drugs and alcohol in India NCB should be behind y’all. https://t.co/gTb30V4xTM

Happy that Aryan Khan is back 😍 https://t.co/MiEudtlsXI

As if he is only one in this country who drinks smh 🙂 https://t.co/mQZbkSVmvA

Since when did partying become a crime? Sanghi logic is insane, makes me puke each time https://t.co/WsXWki47UM

He has all rights to do what he is doing in the clip.

Is partying wrong? As if no one of your channel party and they just sit and watch the kirtons leave him alone.

The continuous fear of being papped, having no sense of privacy, and being judged for living their lives is just too much. Public figures really have a difficult life.