Two months back, the Indian janta had a big reason to celebrate – ‘Delhi Crime’, ‘Four More Shots Please’, and ‘Made In Heaven’ actor Arjun Mathur were nominated for the International Emmy Awards. While ‘Delhi Crime’ brought home the Emmy for the ‘Best Drama Series’, Arjun Mathur lost to 13-year-old Billy Barratt for his role as ‘Ray’ in ‘Responsible Child’, reports News18.

However, Arjun had a speech ready and he took to social media to share it after he didn’t get a chance to make it at the International Emmy Awards, reports The Indian Express. In a piece of paper, the actor penned down:

“An international recognition for an Indian is an opportunity not to celebrate the self, but to acknowledge the millions of marginalised, downtrodden and victimised Indians who are locked in a daily battle for dignity, livelihood and survival. As a child of privilege myself, I pledge this nomination to all those who risk themselves to protect the affirming, all-embracing spirit of India, and to all the brave individuals across the world, who fight to resist the malicious forces of oppression, bigotry and injustice, every single day.”

People online showered immense support on him and said that he is already a winner! 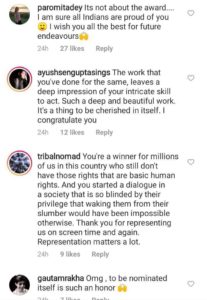 Getting nominated for such a prestigious award and being recognised internationally is itself a big win. Congratulations to Arjun Mathur for making it this far!