Anxiety, clinical depression and excessive stress – these are all mental illnesses that deserve the same medical attention as physical illnesses. Unfortunately, they are often swept under the carpet and ignored until it is too late. Which is why it is so refreshing to see celebrities opening up about their own experiences with mental health and creating awareness about it. Earlier, Deepika Padukone started discussions on depression, as did Shaheen Bhatt.

Now, Justin Bieber has shared a powerful post on coping with anxiety attacks. The tip talks about a technique called ‘grounding’ that utilises a person’s five senses (sight, touch, sound, smell and taste) to overcome panic and set the mind at ease.

My gramma just shared this with me. Share of this helps u

The 25-year-old singing sensation revealed that the tip was something his grandmother sent him. After reading the insightful method, many people commented on his post saying that they too had used it and found it effective.

A few also shared their own ways of dealing with panic attacks – namely counting backwards, yoga, decluttering the house and essential oils/herbs. Take a look. 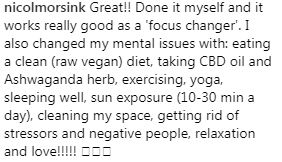 We’re so glad that people with influence and reach are openly discussing mental health because it is high time that this topic gets the attention and care it deserves. If your loved one suffers from anxiety, do share this tip and lend them a listening ear.