Payal Ghosh, an actress who has worked in a few South-Indian movies and featured in Bollywood’s ‘Patel Ki Punjabi Shaadi’ in 2017, recently made allegations of sexual harassment and misconduct against filmmaker Anurag Kashyap.

According to a report by TOI, the actress claimed that the incident took place back in 2014, when Anurag Kashyap was married to Kalki Koechlin.

“It was Anurag Kashyap who tried to molest me in 2014. I tried to open up about it several times, but my family and close friends asked me to be silent to avoid any problem in the future. I wanted to talk about it, but I was silenced. We should talk about it so that people like him don’t abuse their position of power.”

Payal Ghosh went on to narrate what happened a few days prior to the incident. She said:

“First, I went to meet him in his office at Yari Road. He was talking to somebody else and asked me to sit in front of him. He was busy talking to somebody else and that’s why I left. Next day, he called me asking me not to wear anything glamourous that would suggest that I am an actress. He said ‘wear something simple’. So, I went to meet him in salwar kameez. He cooked for me and picked my plates as well. I left after some time but he messaged again, asking me to come. I refused since it was late. He even enquired about who lives with me.”

Special edition “Charles Bukowski” T by @_huemn on my @rickowensonline . Thank you @pranavkirti

She then narrated what happened on the day of the alleged sexual misconduct:

“He called me over to his home, and I went. I sat while he smoked. After some time, he took me to another room, where there were many shoes of his then-wife Kalki Koechlin. He showed me her shoes and said ‘My wife has gone to the US. She is angry with me. I used to cook for her too, but don’t cook anymore. She is angry with me’.”

She went on to add:

“Anurag also said that girls were ready to sleep with him ‘just to do one film with Ranbir Kapoor’. At that time, he was working on ‘Bombay Velvet’. I got scared at that moment. That room had many cassettes, books and a sofa. It seemed like a library. After that, he suddenly got naked in front of me, and asked me to remove my clothes, to which I said ‘Sir, I am not comfortable’. He said, ‘All the actresses I have worked with are ready to come to me at just one call’. Again, I said that I am not comfortable. After some time, I said ‘Sir, I am really feeling uncomfortable and unwell’, and just escaped from the place. I didn’t meet him ever after that incident.”

Keep loving me the way you love me.. I’m grateful to have you all in my life 🖤🖤

When asked about why hadn’t she opened up about the incident when the #MeToo movement had gained momentum in the country, she said:

“My family, my brother, manager and other people from the industry – all of them asked me to stay quiet if I wanted a career in this industry. ‘Your career will get ruined’, ‘no one will work with you’ were some of the things they said to me.”

Anurag Kashyap took to Twitter to deny these claims, reports Business Times. He posted an official statement by his lawyer which read:

“My client, Anurag Kashyap, has been deeply pained by the false allegations of sexual misconduct that have recently surfaced against him. These allegations are completely false, malicious and dishonest. It is sad that a social movement as important as the #MeToo movement has been co-opted by vested interests and reduced to a mere tool for character assassination. Fictitious allegations of this nature seriously undermine the movement and seek to unconscionably trade upon the pain and trauma of the actual victims of sexual harassment and abuse. My client has been fully advised of his rights and remedies in law and intends to pursue them to the fullest extent.”

Have a look at the statement here:

And here is the statement from my lawyer @PriyankaKhimani .. on my behalf .. thank You pic.twitter.com/0eXwNnK5ZI

He also posted a series of tweets wherein called the allegations “baseless”. 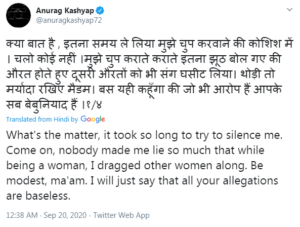 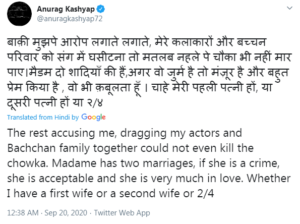 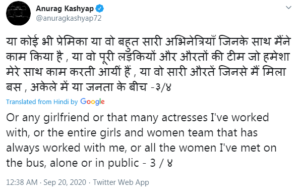 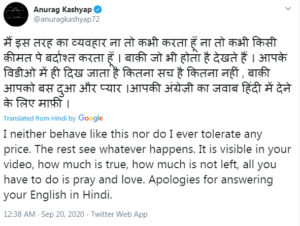 Responding to allegations of using the #MeToo movement for “politics”, Payal Ghosh said:

People who are saying that it's for politics and that I am misusing the situation. Imagine ( god forbid) your sister or daughter in my position, it can even be the mother.. and then let's talk. You would go to war against such men. Isn't it ? PERIOD!!