B-town beauties never miss an opportunity to party harder. Be it a theme party or anyone’s wedding, social media goes wild with stunning pictures of the attendees. This time around, all eyes are on the youngsters of Bollywood who were seen celebrating the debut film of Khushi Kapoor.

As the up-coming star returned after wrapping up the first schedule of her debut film, ‘The Archies’, her friends made sure to give her a stunning welcome. Besties Shanaya Kapoor, Ananya Panday, Khushi Kapoor, and her elder sister Janhvi Kapoor were seen glammed up in glitzy outfits for the fun night. They even posted pictures from their party in Mumbai.

Janhvi was dressed in a pink metallic dress while Khushi and Shanaya arrived in similar-looking shimmery outfits.

While they sure looked like divas in those mini dresses, people online found something amiss in one of the pictures shared by them.

The pic we are talking about has Ananya Panday, Shanaya, and Janhvi Kapoor posing with Panday holding a martini glass. But there wasn’t any drink visible in it. In fact, it is alleged that they badly photoshopped the image to add masala maggi (or bhujia, who knows!) in the glass. 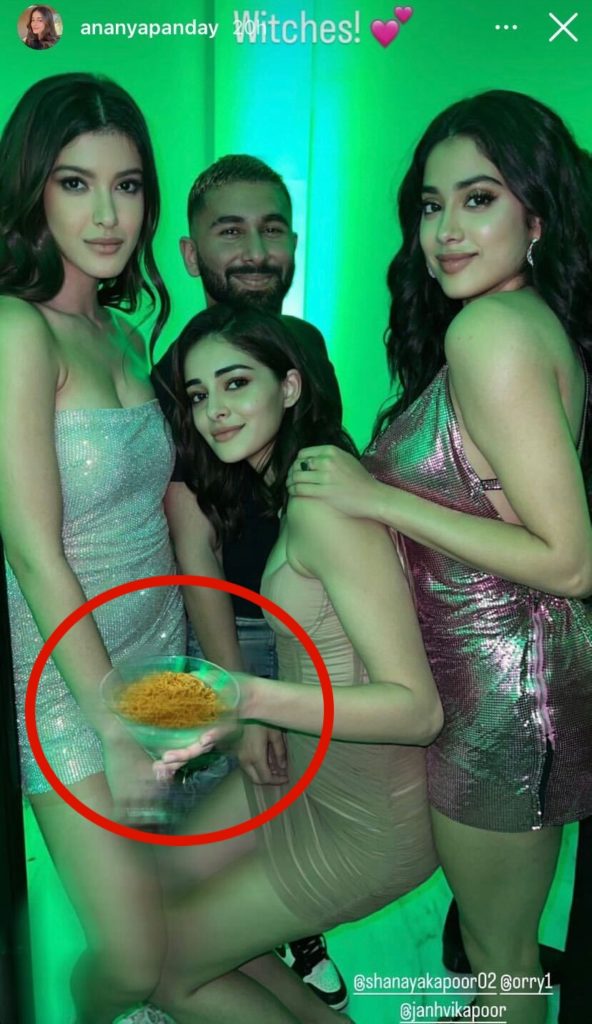 This image made it to Reddit where people asked what was the need to edit a glass of drinks into bhujia?

Did they badly photoshop a glass of alcohol into bhujia? from BollyBlindsNGossip

This is what people said:

Maybe the joke’s on you?

Or they just trying to be safe from all the hate that might come their way if they shared a pic with alcohol.