Akshay Kumar faced immense backlash recently after he was featured in an advertisement promoting a paan masala brand. Akshay has always been very vocal about living a healthy lifestyle and claimed that he steered clear of alcohol and cigarettes. To watch him promote a brand that sells tobacco products was disappointing for many.

The actor later posted an apology on social media letting his fans know that he stepped back from promoting the brand any further. However, in his statement, he mentioned that he has not and will not endorse tobacco, which seemed untrue to many.

People pointed out how in the past, Akshay Kumar promoted Red & White Cigarettes. Some also shared the poster for the same. 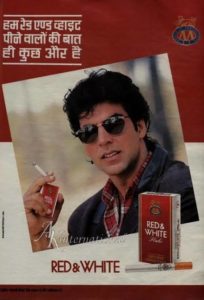 They also went on to expose his dishonest clarification. Here’s what some of them said:

Akshay Kumar asked sorry for endorsement of #vimal but not for Red& white cigarettes & Baba elachi !

Thanks to all of you for standing up for our children who deserve to stay away from cancer.

(However Akshay did endorse cigarettes as his debut in glamor world, contrary to claim in his apology) https://t.co/5FXLOyN4E8 pic.twitter.com/b7be9TiFxg

Since it is an honest clarification, I’d wish there was honesty in the statement Akki sir 🙏 pic.twitter.com/40g6GwcoWl

Your Red and White ads of late 90s are still doing rounds after 23 yrs, and you think this will be forgotten? 😂

You have not endorsed Tobacco?
Red & white bhool gya kya?

Kindly don’t say that you didnt endorse tobacco. You used to be a poster boy of Red and White cigarette. Isn’t it?

What are your views on this fiasco?