Agra: Husband Catches Wife Cheating Red-Handed As She Was On A Scooty With Her Lover, Watch

In a real-life ‘Pati, Patni Aur Woh’ situation, a man in Agra caught his wife red-handed with another man on the road riding a scooty. A video of the incident has gone viral on social media. According to News18, the couple has been married for 10 years and even have a daughter together. However, the husband found out that his wife was cheating on him. As a result, the two had been fighting constantly lately.

On September 11, the two engaged in a fight as usual and the wife walked out of the house without informing him or their daughter. Worried about her whereabouts, both the father and the daughter went outside on their two-wheeler in search of her.

Shockingly, they found the woman on Kailash Mandir Road with another man, allegedly her lover, sitting behind his scooty. Her face was covered with a dupatta and she was wearing big sunglasses. 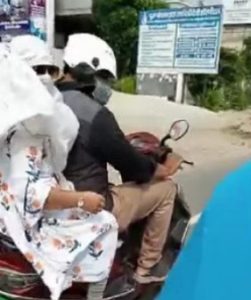 When the husband pulled over his two-wheeler beside them, the lover, who reportedly is a businessman, started speeding his vehicle. However, the husband soon caught up with the duo and a confrontation occurred in the middle of the road.

Soon, the police intervened and challans were issued to the two men for creating a ruckus in public. On the other hand, no action was taken against the woman.

Here’s a video from the incident:

In the middle of all this, my heart goes out to their daughter who witnessed everything in front of her eyes. Watching her mother with another man and her father engaging in a spat in the middle of the road must have been incredibly tough for her.