Earlier this month, a popular perfume company was slammed so hard online that it had to take down two of its problematic ads that mocked women’s fear of being raped.

Several social media platforms were instructed to take down Layer’r Shot ads after a handful of Bollywood celebs said it was derogatory to women. The brand later apologized too.

It’s not that people realized it was humiliating to women after it saw the light of the day. There were also some who suggested the much-needed change in the ads before they got aired. But, the company ignored their suggestions and still went ahead with the ads.

Taking to LinkedIn, Abbas Mirza, senior creative director at a digital marketing agency, shared the story of his actor friend who denied doing the ad for obvious reasons.

Mirza wrote that his close actor friend Saurabh Verma revealed to him during a conversation that he was approached to audition for the misogynistic deodorant ads which were not 2 but 3. However, after reading the script, he proposed changing it.

But since the makers of the ad didn’t give him much attention, he decided to disassociate himself from the brand and politely refused their offer.

Mirza also shared the screengrab of Verma’s conversation with the brand representatives regarding the same. 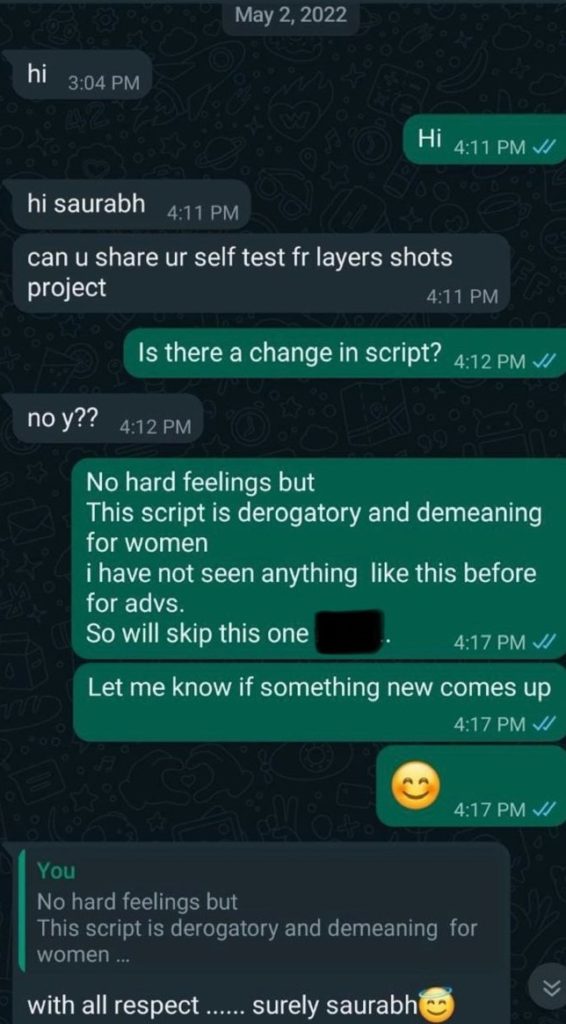 Mirza further wrote that “If only others involved with the project had the spine to do the same, the 2 ads (there were 3 in total btw) would not have seen the light of the day or darkness of the night!”

Saurabh Verma sure did a fantastic job by raising his voice against wrong even if it meant losing a job. This is how people reacted on hearing this:

Now, this is a story worth telling. Kudos to Verma for standing strong against such toxicity in the industry.