Legendary South African cricketer AB de Villiers’ retirement from national duties has been a subject of controversy ever since. The right-handed power-hitter who decided to move away from international cricket on May 23, 2018, highlighted his intention of playing the global T20 leagues as the reason behind the same.

Popularly known as ‘Mr. 360’, De Villiers was hugely criticized by Cricket South Africa and other legends of the game for choosing his personal pleasure over his nation. The controversy saw a new beginning when ABD made himself available for South Africa once again, seeing the team’s disastrous performance in the ongoing ICC Cricket World Cup. However, his offer was turned down by the South Africa cricket board.

While the 35-year-old’s choice of retirement was completely his own, a fan tried to put the blame on the cricketer’s wife, Danielle de Villiers. In a selfie uploaded by Danielle with his hubby, the fan commented that ABD would have been playing the World Cup for South Africa had it not been for her.

“I hope you don’t mind that I put down in words… How wonderful life is now you’re in the world.” . . Much needed afternoon off with my one and only, confidant and bestie💫

He also held Danielle responsible for ruining the former skipper’s life and breaking so many hearts around the world.

However, the brave woman was not letting that pass easily and came up with a fitting reply. In an answer to the fan’s comment, Danielle agreed that De Villers would have been happy to be playing for the national team at the World Cup but has already made himself clear. Giving out a strict warning, she asked the troll to think before writing negatively on their marriage and asked him to keep away from commenting further. 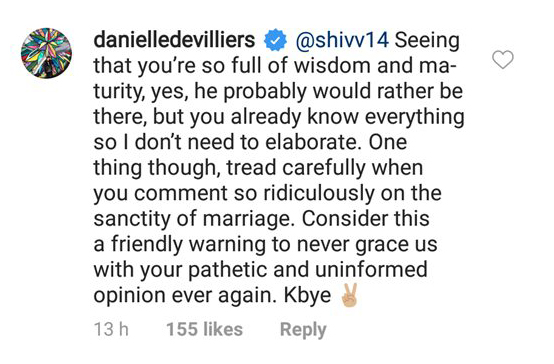 Now that’s how you shut down your haters! Bravo, Mrs. De Villiers!