The Indian Premier League has been going on for over a decade now and it’s been a roller-coaster ride. We’ve seen matches being won when all hope was lost. We’ve seen sixes being sent to the next planet and players running between the wickets like their lives depend on it. And just when you think you’ve seen it all, AB de Villiers has taken one of the best catches of all time just to say, “No you haven’t”.

In the recent match between Royal Challengers Bangalore and Sunrisers Hyderabad, AB de Villiers took a catch at the boundary line that you’ve to see multiple times just to believe that it actually happened. 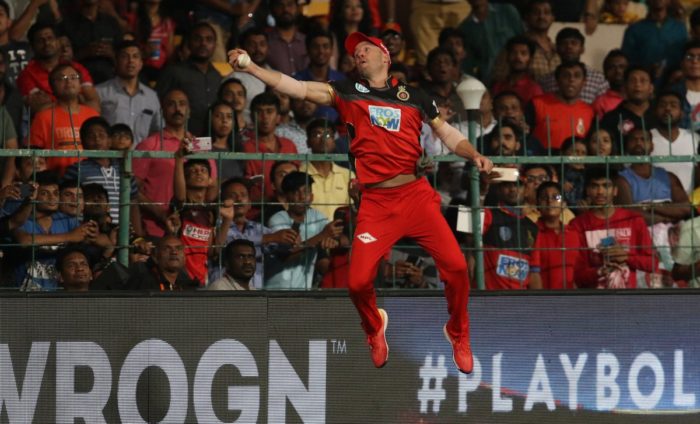 RCB’s run this season hasn’t been up to par. However, that hasn’t stopped them to fighting on and trying their best to get into the play-offs. They managed to put up a magnificent total of 218 against SRH, thanks to half-centuries from AB de Villiers and Moeen Ali. And when they came to defend that total, ABD took a catch that’s unimaginable.

In the 8th over, Alex Hales came charging down the pitch to hit a six off Moeen’s ball. But little did he know that ABD was at the boundary line. He came into the running like a cheetah, hurled himself into the air like gravity doesn’t exist and stopped a potential six. To make things crazier, he caught it one hand!

Here’s the video of the catch:

The catch is truly amazing and netizens couldn’t stop comparing AB de Villiers to all fictional superheroes in existence.

1. Appreciation from the Captain himself.

Hey @BCCI ! Please just give the IPL trophy to AB De Villiers for this catch !!

You could dream about taking the craziest catch, but it won't beat the reality that @ABdeVilliers17 just showed us #RCBvSRH

Forget Karnataka nataka! Just watch @ABdeVilliers17 take a catch for the ages. Wish Bengaluru's netas could provide us something similar to look forward to! #RCBvSRH

8. It looks like the writer can write an entire book on the catch.

The floor is mediocrity

10. Newton would’ve panicked if he saw this.

11. Reportedly, he has been roped in for Avengers 5.

@ABdeVilliers17 should be in the Avengers!🔥 He is a super human! #RCBvSRH #IPL2018

Basically, should they ever do another Matrix movie, I reckon @ABdeVilliers17 has a shot. #RCBvSRH pic.twitter.com/75qZu3Y48J

This catch goes down in history #IPL11 #RCBvSRH . Insaan Kya nahi kar sakta. @ABdeVilliers17 u r one of the greatest players I hv seen. pic.twitter.com/DgWovT2guX

15. Search for that footage with everything you got!

SIDEBAR: The footage from that phone just under AB de Villiers' right hand is going to be something else. pic.twitter.com/rRFG3BDhDV

Throughout his career, AB de Villiers has been one of the calmest players I’ve seen in my life. But even he couldn’t contain his excitement after taking this catch and his smile was a sight to behold. That said, if I ever happen to see ABD just casually flying past my building, I won’t be surprised. The man can simply do anything.