There are so many reasons to love India and so many reasons to point fingers at. But nothing can deny the fact that India, by large, is one of the very few countries in the world that have their heritage intact while progressing to touch sky.

Here goes, a list of many things in India that are easily over 100 years old (but only age wise).

1. Year 1879- First time the demonstration of electricity was conducted in Kolkata 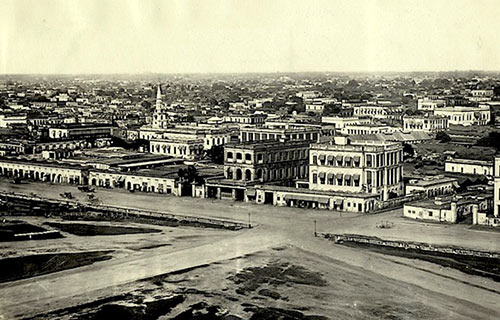 And as of 2013, India is the third largest producer of electricity in the world!

2. Year 1913- Karim’s was established in the heart of Chandni Chowk, Old Delhi

It is just one of the many schools in Kolkata that are over 100 years old!

Rising above the raging ocean, it is also one of the most dangerous railroads in the world!

And talking about railroads, how can we leave behind our very own, ancient yet highly active, Indian Railways;

However, there is another public service set up that is older than the Indian railways;

It set the foundation of what we today know as Bollywood.

The tree became diseased after being struck by lightning. And therefore, the middle of the tree was cut out so that what was left of it could continue to flourish. And it did. Instead of growing as a single tree, it took the form of what is described as clonal colony.
As of today, the tree continues to branch out beyond the 330-metre long road that was originally built around the circumference of the tree.

And it is not just the age old buildings and services and trees that make for the heritage of India! In fact, all of it would have gone down to rubble if it weren’t for us, Indians, who want to keep the heritage alive while simultaneously, working towards transforming our nation into a developed country.

Some other equally important things that have kept the Indianness in us alive since ages are:

9. The diversity we live in since the time immemorial

10. The talent of Indians is also an age old attribute that continues to win hearts world over, till date.

You know about the father of that zero that follows the figures decorating your chequebook, right?
From Aryabhatta to Nagarjuna, from Acharya Sushruta to C. V. Raman, from Amartya Sen to Kalpana Chawla, and from Sundar Pichai to that budding inventor in your school. Smartness is synonymous with Indians.

It is ancient and no matter how much we kiss that Justin Timberlake poster or travel the world, our family will always hold the highest stature in our lives.

12. We are humble, but we know how to raise voice

It took us time, but it was one of us only who gave the entire nation the strength to show the British the door to their actual home. We raised voice then, and we continue to do so now.

13. The cricket mania will thrive forever

And we will strive to promote other sports also until they too become an integral part of India’s identity. 🙂

14. And yes, we can be flying in first class but we will still eat that ‘pav’ with our hands

15. And talking about enjoying food,  let’s end it with a food brand that has been an integral part of Indian kitchens since 1912

It is Nestle people, celebrating its 100 years in India. This beautiful short film shot by Prakash Verma of Nirvana films and written by the very talented writer and lyricist Prasoon Joshi, talks about how Nestle has been with India, giving her people the good taste of life, through the many ups and downs she has faced over a century!

Because old is gold is India’s thing!

This story is brought to you in association with Nestlé India